**DISCLAIMER** The following post is a rant and is not meant to offend anyone. It is for entertainment purposes only.

So, you think since I love food and love cooking that I would probably enjoy going to the grocery store. I mean, it’s an entire room full of ingredients so what’s not to like? …Wrong. You actually couldn’t be more wrong. It’s the worst. The people. The lines. The ridiculous way they “organize” the aisles.

“NO! Black beans are BEANS. They can be found in the canned BEAN section! The can in the Ethnic food aisle might say ‘Frijoles Negros’, but guess what? It’s the same thing as black beans. Shocking, I know.”

There is no need to segregate ingredients, people. They have feelings, too.

The golden one is Zoe and she’s my baby. The spazzy one is Millie…why the picture of the dogs? Well, why not?

And oh, the people… (granted, I’m not really a “people person”), but it’s like they forget the rules of common courtesy once stepping inside a grocery store. Some stop in the middle of the aisle and just stand there staring at the rows of ingredients. Your cart won’t move itself out of the way, lady. Ketchup is ketchup is ketchup, okay? It honestly doesn’t matter if you buy Hunt’s or Heinz. You see, they taste the exact same. Yes…yes, they do. (Some crazy people actually purchase their ketchup based on their political beliefs. For those of you who don’t know, Teresa Heinz is married to John Kerry…Yes, because you refused to purchase that $3 bottle of ketchup, you ruined their day.)

Have you ever gone to the store and every aisle you go down there is the exact same person coming the opposite way. And you continue along this path down Every. Single. Aisle. You now know more than you ever thought you’d know about a stranger based on their food choices…

“Oh, she bought organic granola…must be one of those people. Oreos, too? Huh…Interesting…”

Did I mention the lines? They have 15-plus checkout lines, but only ever have one or two open. What the hell’s the point of investing in the other thirteen lines? Would the front of the store look weird without all of this wasted equipment? Do the higher-ups enjoy seeing the look of frustration in the eyes of their customers? The reasonings are almost endless… 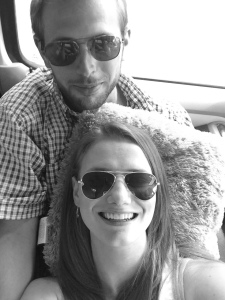 I go to the grocery store because I love food and love cooking. Very difficult to find food anywhere else. Trust me, if I could get all my ingredients elsewhere, I would. It would save me from the frustration of walking through those sliding doors and ALWAYS picking the cart that has the bum wheel on it. (I’ve often thought that maybe all of the carts have a bum wheel, but when I’m walking around the store with my bum-wheeled cart, mine is the only one walking to the beat of its own drum…or wheel really…Anyone else have this problem?)

I know my rant is pointless. I know that on Sunday morning (possibly the worst time ever to go) I will wake up and go to the grocery store where I will incur the wrath of all of these things I’ve mentioned above. It simply wouldn’t be a trip to the grocery store without these issues arising, of course. Also doesn’t hurt that the beau absolutely loves going to the grocery store. Publix to be exact and specifically on Sunday mornings….No other store or time will do. The deli section, the free samples, and the brightly lit aisles call to him every weekend. I usually ignore these particular calls, but the things you do for the ones you love, amirite?

Oh! And one more thing…concerning those self-checkouts…the item is in the FREAKING bag!