I love pizza. Pizza bagels, pizza quesadillas, pizza bread…you name a type of pizza and I probably love it. I’ve never met a person who doesn’t love this delectable dish and if I did, I probably wouldn’t trust them very much. I mean, who doesn’t like pizza?

Lately, I’ve been trying to perfect my own pizza. The toppings are the easy part. Can’t go wrong with whatever you put on it. The dough is where it gets tough. People spend years upon years trying to get their pizza dough just right. During my own time, I’ve learned that the taste and the texture of the dough all depends on the amount of time you let the dough ferment and rise. All over Pinterest there are recipes for “30 minute pizza dough” or “Quick and Easy Pizza.” Let me set everything straight right now: There is no such thing as “30 minute” or “Quick and Easy” pizza doughs. Well, at least no such thing as good pizza with such titles. Honestly, if you want to go that route, I’d suggest calling the local pizza place. It will taste better and not leave you feeling deflated.

Yesterday, I made yet another attempt at my pizza dough and frankly, it went quite well. The process of mixing it, that is.

Let’s turn back the clock…

THE METHOD. When you make doughs using yeast, you always start out with blooming/proofing the yeast, which basically activates the yeast and gets the process started more rapidly. Also, if your yeast doesn’t bloom, it’s a sign that it’s old and won’t work. So, it’s a nice check to have in place to make sure you will get a good rise out of your dough.

Simply, place a 1/2 cup of warm water (about 100 degrees F) in the bottom of the mixing bowl. Add the honey and stir (yeast feeds on sugar). Add the packet of yeast and stir. Allow it to sit for 10 minutes and you should have something that looks like the picture.

Now we will add the 2 cups of flour and then the salt on top of the flour. Salt kills yeast so we want to make sure the yeast stays active by incorporating the salt in last. Add your olive oil (optional) and turn your mixer on (or hand mix if you don’t have a mixer, bummer for you, though). 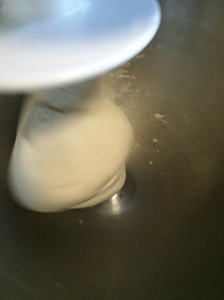 The dough has come up from the bottom of the bowl.

Let the mixer run for about 3 minutes. You may have to add more flour or water depending on the constancy. It’s all about the feel of the dough. It should feel tacky to the touch and should also come up off the sides of the bowl ( see picture).

Once the dough is at a good consistency, let the machine run for another 10 minutes on a medium setting. This will need the dough and form the gluten network so it will have a nice “chew” to it.

THE RISE. Place the ball of dough in an oiled bowl and allow to rise. For a “quick” dough, let it rise for two hours, but this won’t have much flavor or elasticity to it. The trick to pizza dough is to allow it to rise and ferment for as long as possible. A good rule of thumb is to make it the day before and allow it to rise for 8 hours on the counter then put it back in the fridge overnight. The yeast will continue to ferment even in the cold, which will give a nice flavor to the dough. Pull out the dough the next day and let it come to room temperature and rise a final time.

Most people don’t remember to make their dough in advance, which is fine. Just make the dough early in the day so it can get as much rise-time as possible. 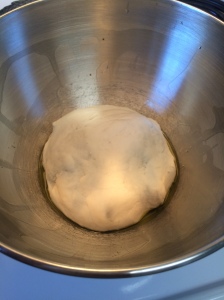 Place in an oiled bowl to rise.

THE WHOOPS. So, my dough was all ready to go. My mouth was watering just thinking about the delicious Cheese and Pesto pizza I was going to have. My kitchen was a little chilly and I’m super impatient. I wanted to help the yeast along (it likes to be warm) so I placed the bowl in the oven and turned it on to warm up slightly. Then I did the worst thing I could possibly do at that moment: I. Walked. Away.

I know. I know. It was an amateur move. You see, I’m making dinner one night on a trip in a couple of weeks and I’m having trouble thinking of an idea, so I grabbed a cookbook (“A New Turn in the South” by Hugh Acheson if you must know) and started flipping through it…the libations, the starters, the poultry, the pork…

“OH NO!” I jumped up from the couch and ran into the kitchen to turn off the oven and pull the bowl of dough out. Shit…

The dough was still dough except the part that was directly touching the bowl, of course. The metal bowl was hot as hell. I was pretty sure I had deactivated the yeast and I would no longer get a rise out of my dough. What. A. Bummer. I couldn’t be completely positive, though. Not until  the time had passed and I made my pizza. I had a hunch. And it wasn’t a good one.

I’m also pretty positive I pulled my left ass muscle, though. I hadn’t moved that fast in awhile and now I have a slight limp. A reminder to get back to the gym…

My hunch was right. The dough did not turn out like I had expected. Lesson learned. Patience is a virtue. Especially when it comes to dough.

Even us trained folk mess up every once in awhile, but it won’t keep my from going back in that kitchen next week and trying my pizza dough out. Again. It shouldn’t keep you out either. People sometimes get defeated when it comes to cooking and they think they just can’t cook because it doesn’t naturally come to them. But you learn to cook. You learn what flavors go together. You learn the techniques and the methods. One day, you’ll wake up and realize that you can cook. And just maybe, you’ll be pretty damn good at it.