Sometimes, you just want to eat comfort food. No muss, no fuss. It’s not the prettiest dish in the world. It doesn’t require the most effort. But, it’s delicious. It warms your heart in a way that some fancy beef roast or rack of lamb just can’t.

This week, I needed that warmth. I craved that warmth. Mostly because it’s freezing in my apartment. Sure, it’s a little chilly outside,but I’m not outside that much. I’m inside. And it’s way too cold. You see, last month (in my personal opinion) the power bill was astronomical. (It wasn’t really astronomical, but there was a significant jump between months, which simply will not be tolerated). I absolutely hate to spend money on bills. Can’t stand it, actually. So when the monetary amount on my utility bills start to move in the wrong direction, I take drastic action. This means wearing sweat pants, sweatshirts, and socks around the apartment because heaven forbid I turn the heat on for one solitary second. And it’s during times like these that I need some food that sticks to my ribs. Some comfort food that is creamy and, frankly, a little bit fatty so that for a moment, I feel all toasty inside.

The dish to bring me this feeling was chicken tetrazzini. It’s a dish my mom would make growing up and quickly became a favorite amongst us siblings. It’s simple to throw together and is quite tasty.

THE INGREDIENTS. Most of the ingredients for this dish I usually always have in the kitchen and you probably do, too.

Now, usually there is some cooking sherry thrown in there, as well. I don’t have cooking sherry at the moment so I just leave it out. Guess what? Tastes pretty damn good without it. Remember, cooking isn’t about following a recipe. It’s about being creative. If you don’t have an ingredient (an unimportant ingredient that is), use a substitute or leave it out. Think outside the box!

THE METHOD. To make this dish, we will be making a béchamel, which we have made before (the chicken enchiladas, anyone?). Then we will layer the pasta, the sauce, and the cheese to make a delightful casserole. 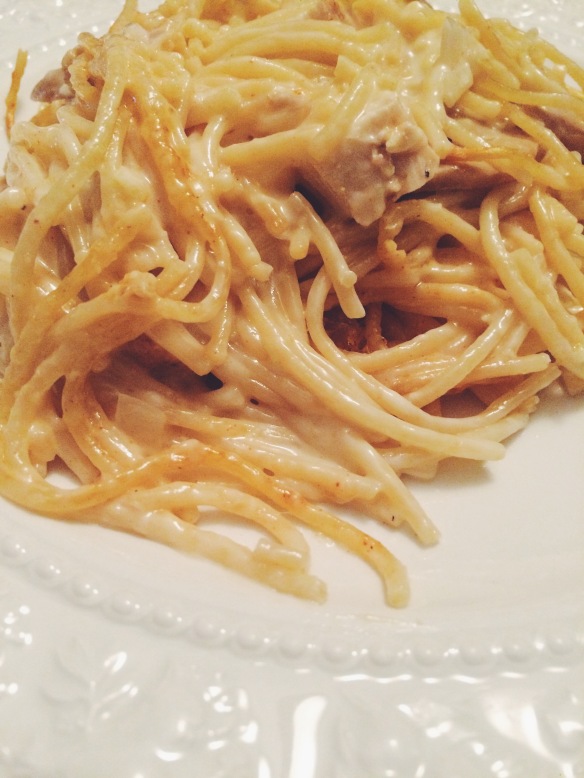